Your Guide To The Olympics

For 2 weeks, every 4 years, we become fascinated with sports we usually ignore. The Olympics affords us the opportunity to marvel at the greatest athletes on the planet, from the safety of our crumb-laden couches. We exclaim, we secretly hope people fall, we root for the underdogs, and deep down, we think they’re all on steroids, as this makes us feel better. There’s no way this level of physical perfection is solely down to hard work and dedication. Pass the chocolate…

The Olympics also brings out our national pride, and a touch of xenophobia if we’re being honest with ourselves. The parade of teams during the opening ceremony also teaches us about countries we didn’t know existed (hello Kirbati), and informs our beliefs that the deck is very much stacked in the favor of giant countries with huge resources and cool flags.

Although it’s way too late in your life to think you could be an Olympic athlete, you’ve probably tasted alcohol, but what about your children? Imagine being able to say your child is an Olympian? Think of all that reflected glory! But how do you know what sport is right for them? And what the hell are the Olympics anyway? So many question marks…

Birth Of The Olympics.

The Olympics were invented by Theodore and Wesley Olympics in 1865. The brothers were the silver spoon sons of Rudolph Olympics, the famous hemp tycoon. Being young well to do socialites, the brothers were under pressure from their overbearing father to find a job, and so they decided to parlay their love of games, and their sociopathic need for attention, into a career. Through their father’s government connections, they invited representatives from Great Britain, Russia, France and Siam to take part in the very first games, which were held in the back garden of their estate in Massachusetts. 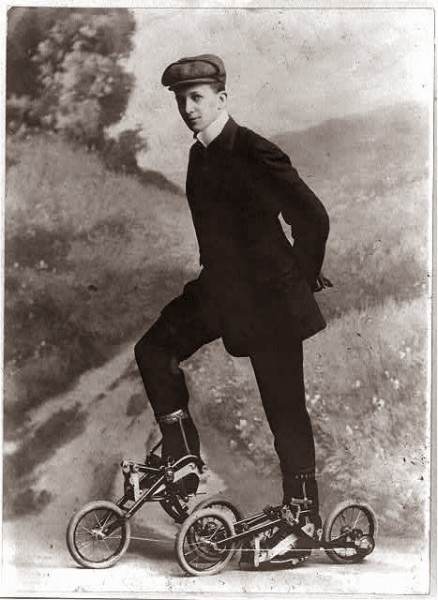 The legendary foot cyclist Erasmus Whipple, was disqualified for not having a moustache.

The enterprising brothers patented the name Olympics and grew their fledgling endeavor, inviting more and more countries to participate every 4 years.

However the sporting festival was not without controversy. On the 28th June 1914, Archduke Franz Ferdinand was killed by Gavrilo Princip, over the Duke’s alleged doping in the servant jump event of the Olympics of that same summer. Princip, who lost out to the Duke, assassinated Ferdinand by strangling him, ironically, with the gold medal the Duke proudly wore for state events. As he killed the Duke, he was heard to shout “Како вам се свиђа те јабуке”, which translates to English as “How you like them apples”. Because this was the catalyst for WW1, it is still considered the most heinous case of doping in world sport.

What Sport is Right For Me?

Here’s a handy breakdown of the intricacies of many of the events on show. Using this handy guide you can decide which sport best suits your body type or skill set.

Archery – Do you live in a society stuck in time, where guns are unheard of? Do you still hunt for your food? Well step right up, because bows and arrows are cool again, once every 4 years. If you are a hunter you should be great at this, as these targets don’t move!

Basketball – Are you roughly 7 feet tall and are paid millions to ply your trade in the NBA? No? Well perhaps this one is not for you. For example, the Chinese team is essentially comprised of the 5 tallest men in China. One of them is so tall, that he is physically unable to jump. That’s too tall. It’s a fine line.

Beach Volleyball – Are you tall, athletic and live by the beach? Well maybe this’ll be a good fit. Each athlete is coated in some mysterious balm when they play, which means that no matter how much they sweat no sand seems to stick to them when they fall down. If you love wearing shades, this one may also be for you.

Canoe Slalom – A confusing sport. The first lesson I ever learned in a canoe was how to capsize and then pop back up, yet none of these “Olympians” seem to be able to even do that. If you like going downstream, and then doing little OCD turns around flags you might be right for this. You are also only permitted to use a canoe stick with one paddley thing on it. Do not show up with a double paddley thing canoe stick or you will be disqualified.

Cycling – There are definitely NO DRUGS in this one. There’s no way. Just no way. Do you own a bike, weigh 60lbs soaking wet, and have masochistic tendencies? You do? Well get cycling.

Diving – They got rid of diving from the edge of the pool in 1960, and now you jump from 2 different types of boards: one is high and solid, and the other one is bendy and made from rubber. You are judged on your tumbles, your entry into the water, and imperceptible micro expressions only the judges can see. If you want to be admired by your friends this is a good one, as regular people think every one of the dives should get a 10.

Equestrian Dressage – Are you almost cartoonishly posh? Do you like having a magnificent beast bend to your will? Is it your dream to make a horse do a tap dance routine? Then this is for you. If you win, you get a medal, and the horse that does the dancing gets an especially tasty pile of whatever horses eat. Steak or whatever… (Ridicule Alert – Horsey magazine recently conceded that this is “the very worst use of a horse” and remarked “how it’s still a thing is beyond us”).

Fencing – Hey how cool are swords, right? Imagine a badass sport where 2 athletes literally fight each other with swords! Well this is not that. They’ve taken away actual swords and replaced them with long wobbly metal poles with no points. I mean forget about chopping or slicing someone, these flimsy rods can’t even stab. Lasers and lights show when you poke someone with your dull point. This is the laser tag of sword sports. Avoid.

Golf – THIS IS NOT, NOR NEVER SHOULD BE, CLASSED AS AN OLYMPIC SPORT. If Phil Mickelson agrees to attempt to do a routine on the pummel horse, then, and only then, will I change my mind.

Gymnastics – I’m afraid it’s too late for you to even think of becoming an Olympic gymnast. All gymnasts begin training in the womb, and are only ever birthed by ex-gymnasts. It is the most elite group of people on the planet. Legend has it that Zeus, while on one of his Earth based sex holidays, seduced the strongest woman in all of Greece. The resulting baby is believed to have been the very first gymnast. If you want to be a gymnast, either you already are one, or you will never be one. No one has ever seen a gymnast after they retire. Scientists posit they simply implode.

Little known fact – Real life Nazi monster Dr. Josef Mengele invented the “beam” routine discipline. He delighted in seeing people unable to even stand on the beam. What a prick.

Hockey – Firstly ask yourself if you have a good strong back, because you are going to be hunched over every time you have the ball. Watching this gives me back ache. Irish find this sport hard to enjoy as we could instead be watching hurling, because in hurling you can swing away, act like a maniac, and bate the shite out of folk. The difference between the two can be illustrated by looking at your typical goalie for each respective sport. 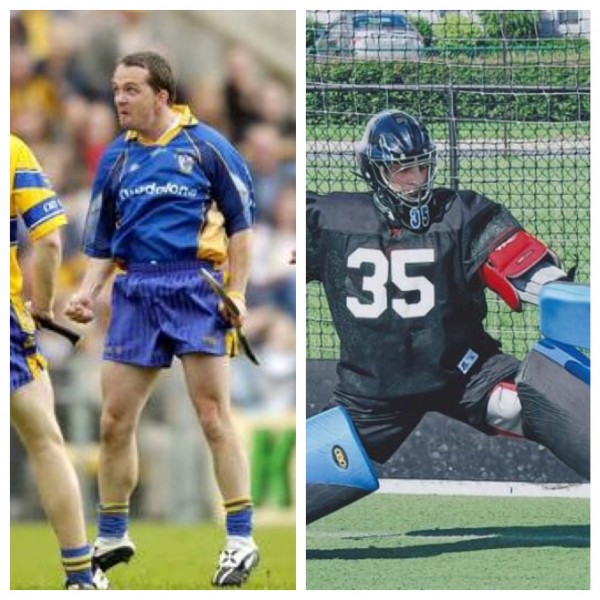 Can you guess which one is which?

Rowing – If you’ve ever watched the Roman slave galley scene in Ben- Hur and thought, “that looks like a laugh” then you’re going to love rowing. While The Olympic Health and Safety department has outlawed the big, burly, whip wielding slave rowing instructors, they’ve been replaced by much smaller men (coxswains) who sit in the boat and verbally mock and deride the rowers in an effort to make them row angrier. Englishman Fent Kimlet is widely regarded as the cruelest, and therefore most effective coxswain to have ever lived. In 1964 he left the games with a haul of 40 gold medals, after he made his rowers cry and forced them to give him all their medals. A great man. 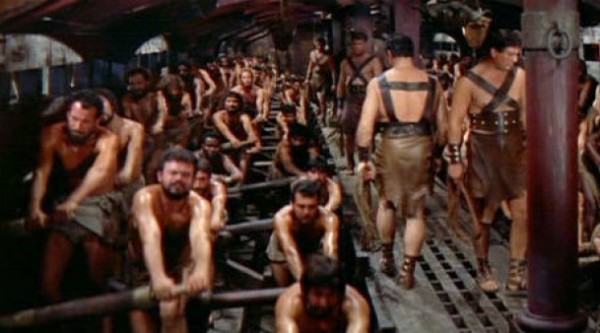 Look at them there, having the craic.

Running – Have legs? Like using them? Give running a try. There’s a lot of variation in the running discipline, long runs, medium runs and really short runs. However, check your body type to see which one would be best for you. Are you a tiny skinny person? Do long runs. Do you have arse muscles the size of cannonballs? Try short fast running.

Speed Walking – Nope. This is not for you. In fact this shouldn’t be for anyone. Just do running. This is the only sport to have inexplicably remained from the original Olympics in 1865. And even then it was only for toddlers who couldn’t yet run properly. Somehow people who were bad at running managed to co-opt it for themselves, and here we are in 2016, and this is still a thing.

Swimming – Are you a weird type of big? I mean like, do you have suspiciously long arms? Or are your shoulders as wide as most people are tall? A type of Gangle Monster? Well this is tailor made for you. You will need to master 4 different types of strokes: Regular, Easy, Backwards and Ludicrous. You will also have to be able to be impervious to water accidentally going up your nose or into your mouth somehow. No one in the recorded history of Olympic Swimming has ever stopped mid race to cough and splutter. Perhaps you could find fame this way?

Choose wisely. We look forward to cheering you on.

Unless we don’t like your face; in which case we’ll hope you fall.

Get To Know The Devil – Part 3