I am what people would call a worrier. I worry about everything. I expect things to go wrong. People say I’m pessimistic, and they’re correct. Why be an optimist? Where’s the fun in that? The world is a nasty place where the idiots are in control. If you constantly expect the best, you’re going to be let down more often than not, and then you’ll just be that fool taking it on the chin, painting a sunny outlook on some depressing vista.

A pessimist, like me, always expects to get fucked over. I’m not just talking about major events, I’m talking everyday annoyances like “I bet you the lights change just as I get to them” or “It’ll rain when I leave the house”. Now if neither of these events happen, it’s internal high five city. I win. In your face, Universe.

How much of a pessimist am I? Well I’m a glass half empty guy, where the liquid in the glass also happens to be piss. So I’ve borderline nihilistic pessimism levels. But this means I get lots of little wins. It must be exhausting being an optimist, the type of person who always has a smile on their face like today is the greatest day of their lives. Being a pessimist takes zero effort. Optimists fool themselves and push all their losses and disappointments deep down inside, all the while maintaining their moronic sunny disposition. They are the ones who grind their teeth in their sleep. A pessimist rails against every loss, and have no mask to maintain. Me, I sleep like a baby.

This rather lengthy preamble is to show that if something bad is possible, I think “why not me” and expect it to happen. This was certainly the case when I witnessed a strange occurrence on a beach on the island of Koh Samui in 2009.

I was on holiday with my better half in a gorgeous boutique resort (that’s right, I’m fancy) which was so good we didn’t leave the grounds for about a week. There was excellent food, great staff and rather than hotel rooms we all had little bungalows which were dotted around the edge of the beach overlooking the sea. What’s more is that the resort did not have any rowdy teenagers or employ any holiday reps, who are, and I cannot stress this enough, worse than The Black Death.

One morning I left our bungalow, fragile, cardboard mouthed and hungover, to go to the little open air bar to pick up make-my-head-better-now supplies. As I shambled along the path digging the sleep out of my eyes, I sensed something was not quite right with the resort. It was a cloudy day, and there didn’t seem to be anyone around, so the bleakly deserted feel to the place also gave me pause.

I kept walking towards the bar and noticed that my favourite barman was on duty. Although he had very little English, and our chats were not particularly meaningful, he did wear a name tag on his shirt that simply read “ZOD”. He was Zod the barman. It would probably be the only time in my life I would get to address someone bearing that name, and I relished every single time I got to say it aloud:

Zod, my good man…. I will sit before Zod…. Vodka please Zod….Have one yourself there Zod….

As much as I wanted to, and as much as I tried to naturally engineer it, I could not come up with a realistic scenario in which I could get him to say “Kneel Before Zod”, but that certainly did not stop me saying it while acting the drunken fool. Deplorable behaviour I know, but seriously, how many times am I going to meet a guy called Zod? That’s one off the bucket list.

Anyway, I kept trying to figure out what it was that wasn’t quite right, but the cloud of stupidity floating above my cartoon hangover was not allowing me to process the images I was seeing.

I reached the bar and sat down, trying to at least remember why I was there in the first place. I must have been thinking really hard, because Zod looked at me curiously and asked if I was ok? I flipped the switch from think mode to talk mode and tuned back in. I told him I was simply hungover. He put up his hand to stop me and said aloud “2 Long Island Iced Teas and 2 packs of Marlboro”. Oh Zod, you know me so well. Maybe later. No, definitely later.

I asked for water, and after analyzing my dreadful body language, Zod went off to rustle me up some headache tablets. (This was fairly typical Thai behaviour. Collectively, from my experience, Thai people are as wonderful, kind and friendly a people as you could ever hope to meet). So there I was sitting on the stool trying to look vaguely human. I’d switched back to thinking mode and all of a sudden it hit me: The sea was gone.

Where once had been a beach with a sea, now stood a marshy sandpit. I looked out to…well… sea, to see where it had gone, and it was a long way off. I’m no good with distances so let’s just say I wouldn’t fancy having to walk out to find it. 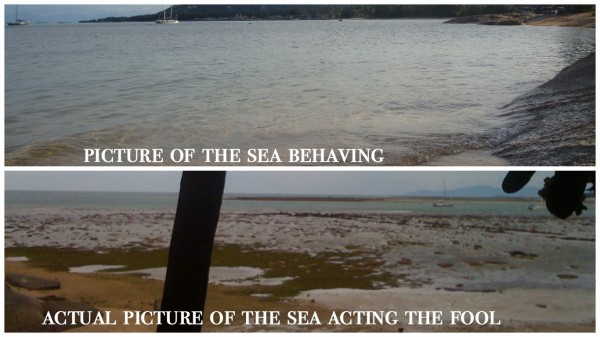 Suddenly the cogs and gears of my mind began to click into action. Had I seen this before? What did this phenomenon mean? My internal, poorly maintained, Wikipedia page was consulted. This wasn’t simply the tide going out. Then it hit me; this is what happens before a tsunami. Holy shit. Panic stations. Sound the Klaxons. It’s happening. The thing I was most worried about is actually going to happen while we’re here. Fucking typical.

Where was everybody? Was that why there was no one around? They’d all left me here to die. Maybe they had been banging on the door but couldn’t wake us up. Oh damn you cheap delicious Long Island Iced Teas.

I tried to think rationally. Tried to focus over the din of the internal alarms and thought chaos. If it was a tsunami, what about Zod? He was still there. Perhaps they left him there as a sacrifice, the hotelier equivalent of a captain going down with the ship. The best damn boutique hotel employee in the all of Thailand.

I stood up and looked far out to sea, hoping not to see a large white squall on the horizon. Zod slipped back behind the bar with my headache tablets. Seeing me distracted by the fact that the sea had vanished he said “Oh, very strange” and pointed at where the sea used to be (because the sea wasn’t fucking there anymore).

He looked puzzled, well more bemused, chuckled and said again “very strange”. Ok Zod, you’re my guy, but stop saying “very strange”. You’re not helping the situation. He then pointed about 100 meters away from us on the wet sand where 3 other staff members were standing. They appeared to be taking pictures of each other making “where the fuck is the sea?” gestures.

The panic had now kicked in big time. I went to the edge of the bar and shouted at the 3 staff members.

Them – We don’t know! (Still taking pictures and frolicking about like the halfwits in a horror movie who will definitely be killed in the next scene).

Me – Has this ever happened before?!

I took my tablets and turned around. Behind the resort was a hill, which led to a small mountain, I’m not an outdoorsy type. Perhaps it was a mountlet. I decided that if it comes to it, we could make our way up there. I decided to go back to my bungalow, the most exposed bungalow in the complex, which now seemed to be jutting out into the sea like some sort of provocation, daring the sea to come and get us.

I woke her up and explained the situation. It’ll be grand she says, obviously used to my hyperbolic doom scenarios. I tried to explain that I wasn’t going crazy. The staff were weirded out for God’s sake. I went to the map. Not only were we on a fucking island, but we were on the east coast of the island, first in line for a shellacking from the South China Sea, and those guys know a thing or two about earthquakes.

I was convinced. The staff, other guests and herself were only convinced of my over active imagination, because they’re optimists. Stupid, unprepared positive thinking optimists. It’ll never happen to me. Well it will someday, and when it does you won’t have a plan of action, and you can’t have mine.

Although I was convinced I was right, I didn’t want to put my plan in action – steal a car, drive up the hill to the mountlet, ditch the car, climb the mountlet, live in the jungle until help arrives– in case I was wrong, and I ended up ruining a perfectly good holiday by going to jail, or having to use leaves as toilet paper. So I decided to put myself on sentry duty.

I sat out on the balcony and stared vigilantly at the horizon, convinced that should I see anything, I would have ample time to put my plan into action. I stared for a while, and realized the stress was feeding my hangover. The doom and anxiety levels were on the rise, so I went and got a beer from the fridge. I continued to sit there, pausing only to go and get more anxiety medication from the fridge, until very gradually, and very calmly, the sea decided to come back to its house.

It gave no reasons, and none of the staff or locals could explain it. I could find no mention of it on the internet, and nowhere in the area experienced a large earthquake. But for me, after noticing the danger, and having a plan, I would have made it. The pessimist would have made it, while all the gormless optimists would have stood on the beach taking “where’d the sea go” pictures and being chased down by a merciless wall of earthquake water.

Ok, in the end there was no tsunami. But there could have been. Plus, I got to sit outside for several hours, drinking my hangover into submission, getting day drunk as I kept watch in order to save the lives of everyone in the resort. My services were not needed in the end, but imagine they were?

So Don’t ask me to turn my frown upside down, because this frown is a product of being deep in thought. I’m concentrating on thinking up escape plans and defence strategies for possible disaster scenarios that your sunshine and lollypops brain won’t even let you countenance.

In short, this grumpy prick might save your damn life some day.