The following words were written on 3 different planes on a return trip to LA in February of this year. I hate flying, and usually use alcohol to calm my nerves. In this case I more or less relied on Valium. As my mind races I try to write down exactly what I am thinking about.

Apart from added Bold text, none of this has been edited.

Walk onto the plane, almost high five the air steward. Then the realisation kicks in: middle seat. My mood drops while the head still floats. Guy on the right, let’s call him “Bof” looks like he took French classes in how to be even more French. V neck, hirsute, nose, and an attitude that projects “meh” “bof” and “desolé” all at once. I imagine he’d be kicked out of the absinthe bar he frequents with his philosophy grad friends if I managed to get him to crack a genuine smile. However I can only assume he is also full of murder at the prospect of 12 hours without a gauloise, so he’s not all bad so far.

The elderly gentleman on my left is quiet and seems to have decent street smarts, given that he’s made zero plays for the armrest, which is wise, because I’m not fuckin playing anymore. Not after Lardo mcStink and his flank offensive on the Cityjet finder land plane in which we catapulted to Paris an hour ago.
No.

Hold everything trolley Dolly’s are giving the orders now. If they done turn off the street then I’ll either be too warm or hot or cold or, could you imagine all three at I once? Pick a part of you to be too hot for a day. I’d pick hair. Just wear a hat. Hot hair solved. As for some part of me to be cold, id pick my stare. Imagine how cold eyeballs feel in your warm eye sockets. Doesn’t sound that horrible. You’re probably better off watching sad movies. Won’t well up watching sne shut in which  mmmmmmmm  Stephen Segal doesn’t doesn’t feature.

I should break. Delete key and n no Nm

Mmmmmmm key are ruining me shit. Maybe a collapse

3.30 am or pm, who the fuck knows.
Ok the Valium is wearing off. I slept maybe 2 hours. Woke up, ate some gruel, drank red wine and champagne and then had brie for desert. I really should have been  French. Chocolate for breakfast, sugary bread, fuck you attitude. Ah well. It’s dark. Which weirds me out. If it’s 3.30am then where the fuck are we, and if it’s 3.30pm, why is it so dark? Oh it’s probably not 3.30. Sky rules: the higher and faster you go, something something, time warp.
Not only am I bored out of my balls but I am deeply uncomfortable. My back is mush, my legs have both got the jimmy leg, neck is sore. Arse is sore for God’s sake.

Oh good God. I just checked the map. We’ve still got 7 fucking hours!!! So it’s time to pop a fucking sleeping pill. There are 3673 miles yet to go. I swear if I don’t sleep I’m going cause some shit. I’ve never been as uncomfortable in my whole life. I feel trapped and my body is breaking. Shitehawk on the right has his bitchy little eye mask on now and is having a kip. Meanwhile I can’t switch off. Jesus I hope that was a sleeping tablet I took. Can they go out of date?
6h58mins to destination. Fuck this noise.

I’ll show Frenchy that a real man doesn’t need an eye mask to sleep. A blindfold to help you sleep? Makes no sense. How does it not feel claustrophobic? You do realise you have eyelids don’t you? Think of them as curtains for your eyes. All I need to sleep on a plane is Valium, a sleeping pill and a bunch of booze.

I think maybe I’m already dead and this is Hell. I keep having snippets of sleep, but it’s impossible that there is still 3.5 hours left to go. Im simply too uncomfortable to sleep. No amount of tablets will change this.

So I get through security and find a diner right beside my gate. After a monstrously disastrous uber journey and all the rest I finally felt a moment of peace. I’d have a few beers and some fried anything. Then the text came in from my Ma; the water was shut off in my flat so I’d have to stay with them for a few days. It was the perfect storm. Living with people for a week I need my me time. Living with parents for fun, as an adult, is not something that happens in our dimension. It’s only in Bizarro world this, wait. The lady beside me has a dog on her lap. Jesus Hell! Are you kidding me. It’s a six hour flight. He better be lame with no arse, or vocal chords. Ok what could happen here? 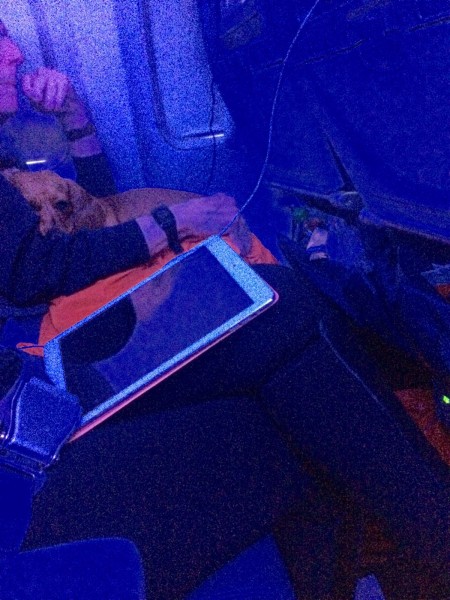 1. Dog barks for 6 hours – I strangle dog and owner, become inconsolable with guilt, shame and residual rage, I open the exit and jump out, inadvertently killing everyone with me.
2. Dog shits on his owner – I have to “help”. I get the boke, vomit “by accident” all over the dog/owner and then demand a 1st class seat.
3. Dog shits on me. I punch dog then owner. Then absolute hissy fit like a six year old, complete with comedy high pitched wail. I punch an innocent passenger who laughs at me, and am restrained by much bigger Americans. I’m tied too my chair and gagged, thereby forced to breath through my nose, dog shit still festering in my lap. The flight is diverted to Alaska where I am given 5 years hard labour.
4. Dog shits on self – how do you wash a dog on the plane? Also bits of his leavings are going to fall off his hair onto the place. Say it gets on the seat? Once again I vomit and chances are I’m the bad guy because I scared poor old poochy.
I’ve seen hundreds of flight attendants pull on those life vest things and not once has one inflated by accident.
He hasn’t farted yet.

JFK to DUB – 7 Hour Flight
Ok. I think overplayed this perfectly. My body was briefly affected by the Valium and made me drowsy but I didn’t sleep so now I’ve popped a little dreamy sleepy nighty snoozy snooze pill to take me through the night. Better still I’m in a bulk head outside lane seat. So I do not have to be moved no matter how unpleasant my various noises make it for everyone else.
Now there is an issue with the tv thingy. It pops up like a table from the arm rest. But I just tried it and it won’t work. I stopped short of giving it a full   “Nnuuuggghhhh” reef, but one of two things is happening here 1. I’m too weak. 2. It’s fucked. 3. I’m fucked. 4. Needs more hammer.
Bríde and Fawn just got on the plane. The Irish one looked to be trying to get away from the American girl, as she was introducing herself loudly as they walked past my seat. I don’t want to talk to either of them.
Jesus those 1st class pricks get attractive, healthy looking flight attendants. They have tailored red dresses. Meanwhile our ghouls look like they got them in the lost and found. They’re all just wearing a black ill fitting moo moo type of a tarp. One also has hooker boots and braces on her teeth and she reminds me of Eddie Izzard. The other one looks like she might be her Auntie.
I’m the first row, next to 1st class. Perhaps I can make it in and do a trailing fart to ruin their flight, even just for a second. It’d make me happy. Oh hold on, one of the black guys from the Madonna Vogue video seems to be a flight waiter guy. And he turned up in the same gear he wore in the video. I don’t think I’ve ever seen a more disparate group of humans doing the same job. I must name them. So there’s “Senorita Fancy” in 1st class, then “Eddie” and “Auntie Em”, and obviously “Vogue” representing the lads. Another lady I’m just going to call “Barb”. She looks like a Barb. I’ll maybe just say it quiet and see if she looks up. Nope.
This tablet hasn’t kicked in. I have some Philip Glass on the phone to pull me to sleep. Problem is I didn’t make a playlist, so every now and again there is one of those crazy fast “bidelybidelybidelybidelybidelybidely…..” Songs that are so intense I once had to turn it off to look for something. So when trying to sleep it freaks you out.
Oh God this comedy Delta safety video is on again. I think I’d hate the person who wrote the script. A heavily made up, and plastic surgeried, a la Mickey Rourke, “sexy” woman suggestively takes a cigarette out of a goat’s mouth. A real goat sitting across the aisle. She then shakes her finger with a coy pouty “no no no” fashion. I feel sorry for the goat.
We’re about to take off. Oh and a guy demonstrates the oxygen mask thing with his ventriloquist dummy. HAHAHAHAHA! Genius. Anc the dummy looks at him all crazy like “what the hell are you doing?” And the ventriloquist looks to camera as if to say – can you believe this guy. He’s a real dummy. AHAHAHAHAHAHA. Well done marketing company. You knocked it out of the park on the Delta job. Awesome. It’s hilarious AND informative! Go fuck yourselves. Talentless.
Cool the plane is moving and one of the things overhead is squeaking with every bump. If I go to sleep on this plane, I have to go straight to work when I land. I’m just reminding myself so I won’t give a shit about how the flight goes…

The Plane Chronicles No.2 – The Superbowl Unpleasantness

The Plane Chronicles No.3 – The Drugs Take Effect